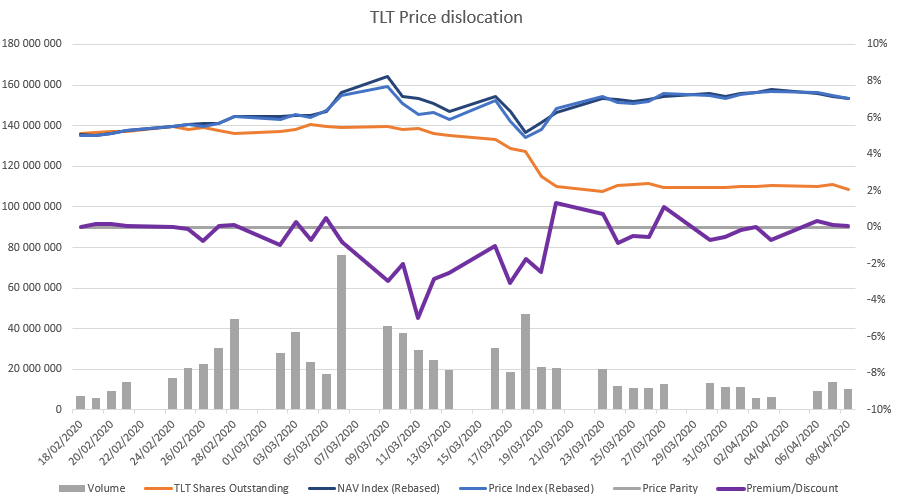 On the chart below, we can see that volume on TLT trading began to spike on March 6 and a discount began to appear. The number of shares (orange) didn’t react until March 11 where the discount was 5% ! Then, as the number of outstanding shares started to decline, the price got back in line. Monday 13th, the FED started to buy treasuries and the situation came back to normal during the week.

As discussed in a previous article, I took advantage of the price dislocation of the ERNA ETF. ERNA is an ultra short corporate bonds ETF. The story is somewhat similar. Notice how it is difficult to see the NAV change (drak blue line) but how the price (light blue line) is dropping. Here again, there is a lag to see any shares outstanding change. The first reaction is an increase in the daily high/low spread, then the creation of a discount.

A similar one is NEAR, a somewhat riskier version of ERNA. Being bigger and quoted on the NYSE instead of LSE, the issue started one day later (March 18 instead of March 17) and was resolved more promptly. Comparing NEAR and ERNA, I see no underlying reason why ERNA should had a higher drop in price and a wider discount that lasted longer. As said, the underlying is similar and even less riskier in the ERNA case (shorter maturity, less BBB bonds).

An interesting one is HYG, high yield bonds. High yield bonds are risky, hard to price and somewhat illiquid. Yet, the market was more orderly. Notice that the volume is very high (it is multiplied for ERNA and NEAR). The shares outstandings are dropping end of February (mild impact on the discount) but then increased during the crisis which led to a premium of 2% that lasted 4 days.

We can see another interesting pattern in LQD (investment grade corporate bonds). Notice volumes are smaller relative to HYG and we have a wider discount/premium. First a discount as people are dumping LQD. Then, on March 23th the FED anounced that it will buy corporate bonds. That led to a premium up to 5% even with a strong creation of shares. One can argue that market makers couldn’t sustain demand.

It is interesting to note that the TLT discount was almost solved when issues started to emerge in ERNA and NEAR. I would argue that dealers could storage more of the later and make an orderly market. On NEAR, there wasn’t much transaction before March 13th where the daily spread and the discount started to rise. On the other hand, the first sign of stress in NEAR was on March 9th but the dealers saved the day. But the stress stayed for a few days where the magnitude of the daily spread indicate that the discount was already present during the day (because it’s way bigger that any underlying price movement).

I will paraphrase Mike Green saying that when liquidity disappear, ETFs behave like closed-end funds instead of open-ended funds.

I remember well 2008 when small caps funds (non ETF) were forced to sell discounted illiquid shares (like the funds managed Richelieu Finance). But those were forced to sell, with an impact on the underlying, no matter the price. Here, the impact on the underlying is less important. That means that similar ETFs can behave differently because they face a difference price action.

More from StressMore posts in Stress »